February 01, 2015
I don't know what it is, but people tell me that I need to do this or that and I nod my head and go on doing things my way. Then eventually, I learn that they were right all along. For example...


After the initial panic, when I thoughtI had paid for a non functioning 3D printer, I got to use the really quite good 600 Euro XYZPrinting Da Vinci V1.


Right, the demo has worked, time to do a lithophane. There's tons of stuff on lithophanes on the net, but basically they were ceramic objects with images etched onto them. They were initially made by French craftsmen more than 150 years ago. You view the lithophane backlit (presumably with a candle or oil lamp). The light is behind (or inside) the object. Where the craftsman leaves a lot of material the image appears dark. And where he scrapes away much of the material the image appears light.

3D printers are ideal for creating lithophanes because if you use slightly translucent white plastic (and my program PhotoToMesh) to create the STL files you can do things like this:

So, how was my own first attempt at using my own software at making a lithophane? Well. Errr....

The problem was that it was too thin, about 1mm, and the printer cannot accurately differentiate the levels to print enough. I should have listened to my friends and I should have examined their photos more. So I had another go:

Better, but still not enough depth. You can see the contour lines around the shoulder of the cat. Again there was not enough vertical space for the printer to lay down many different layers, even though I'd set the layer depth to be 0.1mm. I needed to give the printer more depth to work in. But, of course, I didn't, I just made it bigger:

Finally I upped the total thickness to 4.4 (from 3.4) which gave more scope for contrast. So the light areas (where there is little material) are 0.9mm thick and the dark areas are 4.4mm thick. The lithophane above is the one on the left in the photo below: 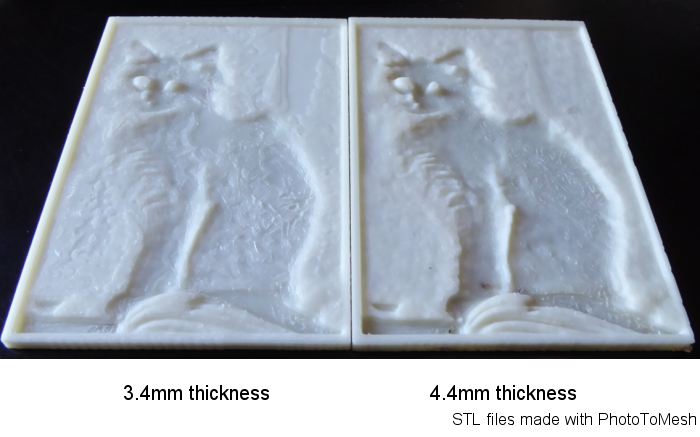 When back lit you can see that the deeper thicker lithophane has more contrast between light and dark: 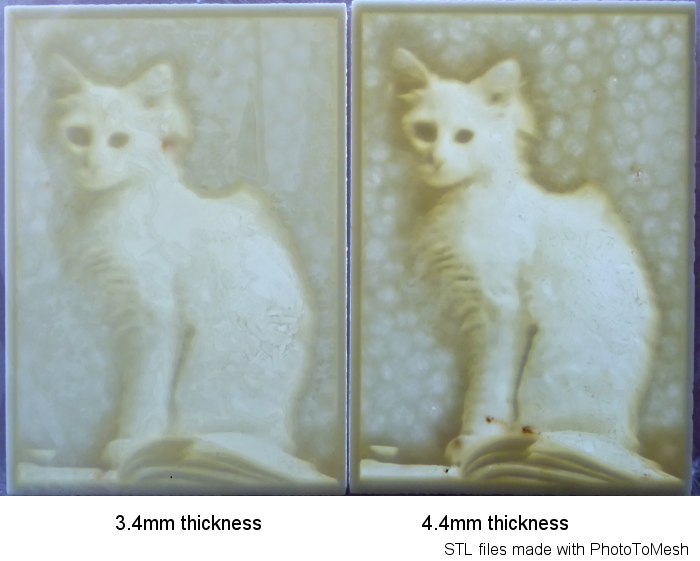 In other words, on the main PhotoToMesh screen:

By the way, if you are thinking of getting a 3D Printer be ready to live with the smell of burnt plastic and the quite loud continuous whine of stepper motors, and the anxiety of wondering if the 5 hour print will finish, and if it finishes will it come out well?

Since I've been selling a 3D printer program ( PhotoToMesh ), since 2010, more than 4 years ago, I thought it might be time to get hold of a 3D printer myself, instead of relying on indulgent friends and beta testers. Here in Italy it was cheaper to by from a local distributor than Amazon.it, since if the distributor has a shop nearby, you can save 50 Euros on delivery by going to pick it up yourself. So it cost 599 Euros for my XYZPrinting DaVinci 1 3D Printer. Foolishly I had not thought to read the measurements of it, and when I saw the box in the shop I thought: Ah, what do I do now? I had to push down the back the seats of my little Kalos car to get the box to fit in it. I found a place for it at home, but with difficulty. Now when I buy things that cost that much I always feel a bit sick in my stomach. Am I doing the right thing? Will it work? Is it a waste of money? I decided to set it up the following morning, when I'd be bright and intelligent. Ok, stop smi
Read more