July 19, 2015
The third verse of The Rubaiyat of Omar Khayyam goes like this:


And, as the Cock crew, those who stood before
The Tavern shouted--"Open then the Door!
You know how little while we have to stay,
And, once departed, may return no more."

It is one of the poems I'm learning by heart. (Not the whole thing, it is far too long, but the first few verses.)

Anyway the second line has, to me, a sort of tension:

"Open then the Door!"
Because it would be more natural to say say "open the Door then" but that would not rhyme. So "then" is put in the "wrong" place...

"Open then the Door!"

...and gives me pleasure. It happens in other rhyming poems. And I noticed that I get the same feeling of tension when playing backgammon.


And those laws of proability sets up the web of tension over the board which occurs in my mind as I play.


Pieces left alone can be eaten by the opponents pieces. For example is it better to place a piece close to an opponent's piece or further away? It is my turn, I can put my black piece close to my opponents the white pieces...

...or I can put it further away (hard to see, black piece on black point on the right)...

It depends exactly on what you mean by "close to". Just like you, your opponent has two dice. My black piece is on its own and can be eaten by one of the opponents three pieces if he throws the right number. There are 11 (30.1%) ways that he can get a 1 with two dice... 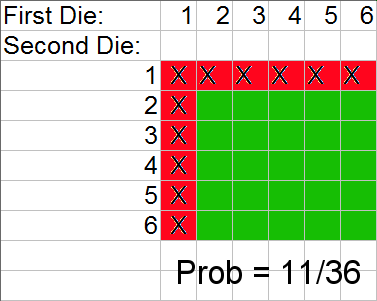 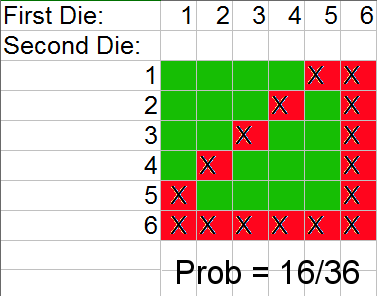 So just considering this simplified situation it is better to be within 1 place from your opponent rather than 6 places, even though 6 places looks safer:


The reasoning could be that the further away I am from my enemy the safer I am. But do the calculations and you'll find that a distance of 1 is safer than a distance of 6. Maybe that is part of the tension I feel as I play backgammon. Something looks more dangerous but is actually less so.

And over a full game, for points, the tension extends and contracts over time and the 2D space of the board.


I play with friends. I only once went to an offical tournament (in Milano). At the beginning of the tournament the organiser, a large man with a far away look in his eyes, "shook" my hand by letting me touch his fingertips. Hmm, I thought, I must have offended him by in some way. Then I played a game with a thin blonde woman who smoked and gently blew the smoke into my face. She played well, won and I was out of the running. But because of the slippery handshake and the smoke in my eyes I decided that this was the first and last official backgammon tournament I'd play at.


So I play with friends and enjoy the clatter of the dice and the feel of the hard round pieces as I slide them over the smooth wooden surface. 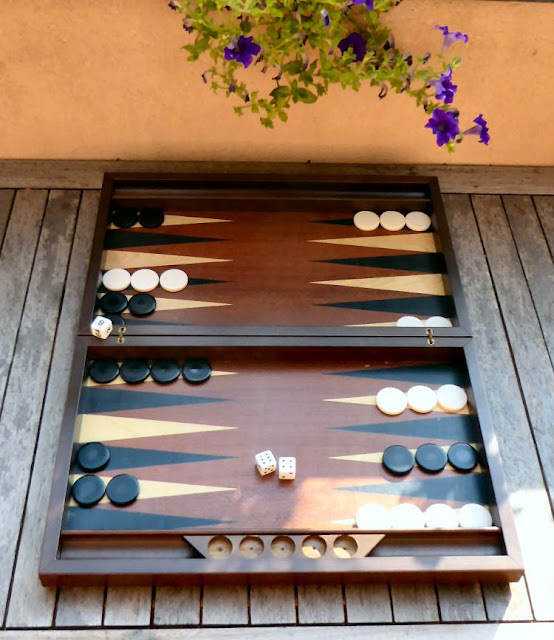 And in the mornings I remember...


Dreaming when Dawn's Left Hand was in the Sky
I heard a Voice within the Tavern cry,
"Awake my Little ones and fill the Cup
Before Life's Liquor in its Cup be dry."

There's a test somewhere on internet which tests reaction times, or recognition times, of the names of colors. It is a test of the Stroop effect. For example you have to say what color is the text of a word, but the word is green, and maybe it is written in red.


When you do the equivalent test in black and white people are generally more accurate and faster. The problem, presumably, is because the brain recieves two messages...
The color of the letters What the letters say.
...and has to conciously decide which is correct.
A red arrow stop sign in a traffic light is a place where a shape and a colour disagree. This is why I don't like these traffic lights...

I did not like them even before I heard about the Stroop effect. The red stop arrow I particularly dislike, because an arrow, to me, say "GO! GO! GO!" while the red color says "STOP!"
So, combined, they confuse me. But maybe it is because I'm limited, as my "friends" and "family" hint…
Read more