May 19, 2015
Nostalgia is not necessarily for a long time ago. I'm oddly nostalgic for last Christmas. Christmas 2014. The cat had an ischemia the day before Christmas Eve. I could not believe it, suddenly his back legs just went floppy. Within a few seconds. He started to drag himself around the room, back legs laying out behind him like two extra shorter tails. It was horrible and sad to watch.

So Christmas Eve was spent at various vets, and the conclusion was, that he'd probably regain some control and power in his legs, but not be as he was before. I did not believe them. We were told to help him regain this power and control by lifting his back end up with a scarf under his belly and accompanying him on his walks around the garden. Only using two front legs fo 90% of the work.

It was a terrible time. Ok, not terrible like being in a country invaded by ISIS, or having a nearest and dearest being diagnosed with incurable cancer. I know, I know, but I have got it all in perspective, don't worry. Still it was painful to see him struggle away along the floor, trying to be as normal as possible, but clearly failing.

We took him down and lifted his back end up with a scarf, and off he'd run! Suddenly he felt lighter I suppose, and we had difficulty keeping up. "What is this antigravity machine attached to my bum?" he was probably thinking.

Eventually we began to hope that maybe the vets had been right. He regained some rigidity mixed with clumsy movement in both his back legs, and began to limp (badly) around the garden on his own.

Yes! Yes! All very interesting but what about the nostalgia, the title of this post?

I'd take him down during the day, when there was enough light to find him if he hid somewhere. I'd follow him around listening to podcasts as he sniffed the grass and looked longingly at the birds he used to chase. He was getting better and starting to complain that he wanted to go down during the night. He used to be a "dirty stopout" before his illness.

So I began to accompany him for 30 minutes in the evening. He'd stay under a tree with low branches in the dark. I'd walk about nearbye with my earphones in. The dark. The tree. The podcasts. The passing cars. Sometimes the stars, sometimes the low grey clouds.

And that is it. I have nostalgia for that time in garden, in the failing light, alone except for a limping cat. Odd eh? Maybe if the cat's legs had not improved as much as they did over the following months I would not be as nostalgic for that Christmas. But he did recover and I am strangely nostalgic.

And here he is at the end of January. 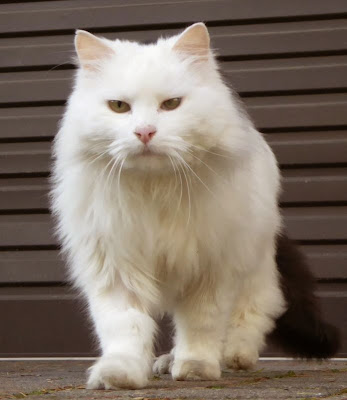 His tail was paralysed too and will never again be the erect black fluffy indicator it used to be. But he seems a happy enough cat now.