December 10, 2014
Chomsky says that it was likely that concepts arrived before language. And I thought: how could it be otherwise? If there were no concepts what would we have talked about? Hundreds of thousands of years ago, when we were not quite human, the concept of "I agree" was probably communicated to the boss of the monkey troop/tribe by movements, postures, gestures. Then maybe the word "yes" came along. Then another more complex concept occurred to the animal/humans, and afterwards a word was invented for that concept.

- You're an expert are you Owen?

No, just saying. Like. But it strikes me that many people have not really thought about language and yet say you need language for concepts. This idea is rife in Italy, where Latin, though slowly losing it insane grip on intellectuals here, is still considered a neccessity for civilization.

Look at these words:

and think about their meaning. Did you hear a voice, or see an image in your mind? Even the most rough and ready explanation of the Solar System is clumsy (as a thought) compared with the image (as a thought).

The following paragraph is a quote from Chomsky and just serves to separate the words above from the image after the paragraph.


"The speed and precision of vocabulary acquisition leaves no real alternative to the conclusion that the child somehow has the concepts available before experience with language and is basically learning labels for concepts that are already part of his or her conceptual apparatus. This is why dictionary definitions can be sufficient for their purpose, though they are so imprecise. The rough approximation suffices because the basic principles of the word meaning (whatever they are) are known to the dictionary user, as they are to the language learner, independent of any instruction or experience." 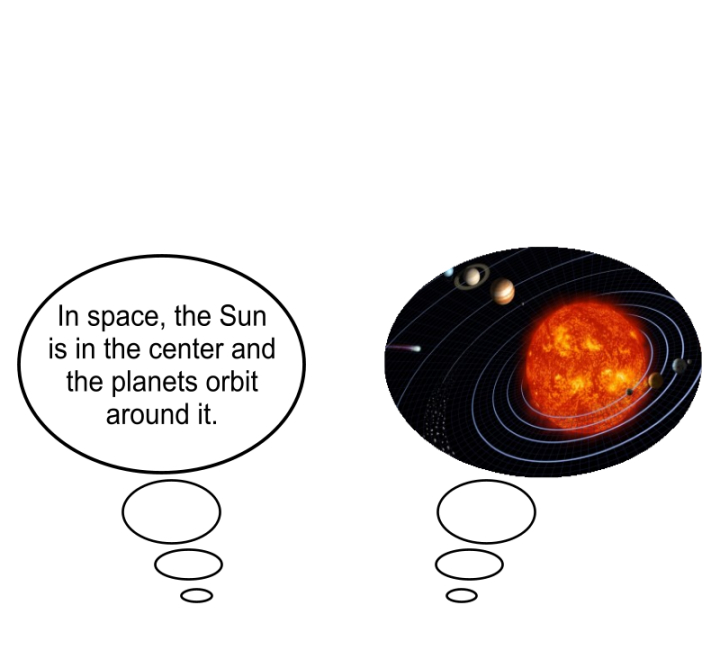 Do you hear the voice or see the image?