Showing posts from February, 2018
Show all

February 26, 2018
The Radio Three Documentary often has interesting podcasts which I listen to as I drive to and from work. But sometimes I want to throw my MP3 player out of the car window at the things they say. Such was the case with " Sunday Feature: Select Copy Paste 3 partsConception ". It is about using technology in art, and how it affects the artist. One of the first to be interviewed was Holly Hendon who pointed out something that I've thought for a long time. Traditional blown, plucked, hit, instruments are very limited in the sounds they can make, and it takes ages to learn how to blow pluck and hit them. But the computer has an infinite variety of sounds which you can get to use without having to learn how to blow, pluck and hit.  Unfortunately, from the extracts in the program, the music (the sounds) Holly creates with the computer are not great. They avoid cliche but they also avoid being listenable music. She said that she "exposes what is happening in societ
Post a Comment
Read more

Death In The Bank (La morte in banca) 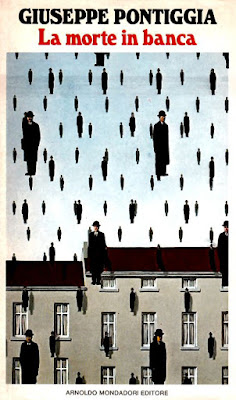 I'm reading "La morte in banca"by Giuseppe Pontiggia. It is set in 1950s Italy and is about a 17 year old who gets a job at a bank, but who really wants to study literature at university. I won't spoil the plot for you, but one scene struck me. A roomful of people all working on mechanical adding machines. And I thought that in some ways not much has changed. As far as I can make out at least 50% of all people in all the offices in all the world are copying columns of numbers from one Excel sheet to another Excel sheet. Excel is silent compared with a mechanical adding machine, but I imagine the expressions on the faces of the operators are much the same. And how many people use Excel as a database!? They think: " Excel has a lot of tables, databases have a lot of tables, therefore Excel is a database ". Excel is a brilliant calculator, but a godawful error-prone inefficient "database."  The problem with Excel is that you can start using i
Post a Comment
Read more
More posts